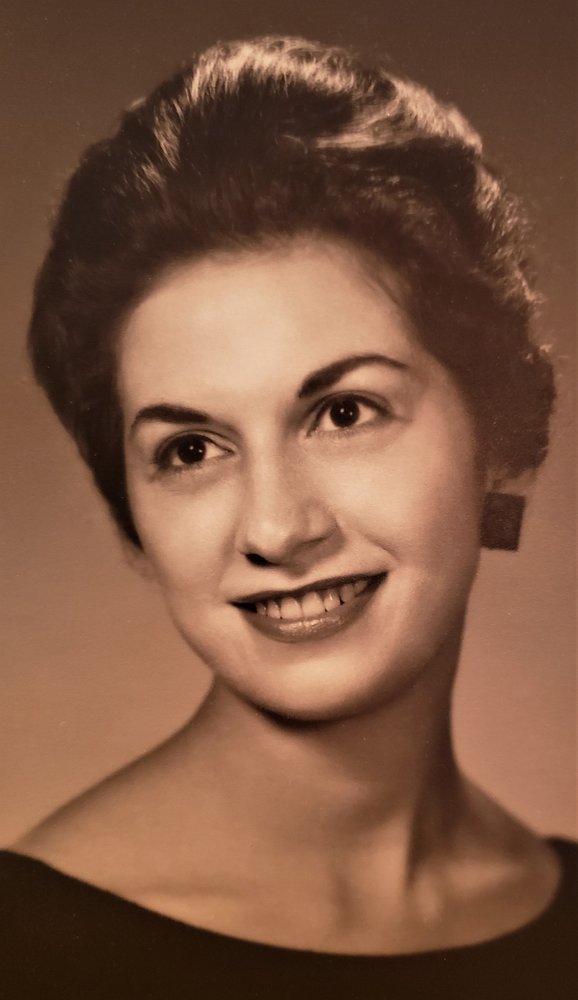 Please share a memory of Joanna to include in a keepsake book for family and friends.
View Tribute Book
Joanna (LaFaro) Moore, age 85, died peacefully at St. Elizabeth’s Medical Center, on Monday, May 25, 2020, after a sustained illness. She was born October 1, 1934 in Frankfort NY, the youngest daughter of Benedetto and Anna (Catalano) LaFaro. Joanna learned to play the piano and the organ at an early age and subsequently played in church and professional venues throughout her life. She served as organist at the former St. Mary’s Catholic Church in Frankfort from the age of 10, where she first led the children’s choir and later the adult choir. Joanna attended Frankfort schools and was valedictorian of her graduating class at the age of 16 in 1951. She received a full scholarship to Syracuse University, where she earned her Bachelor of Arts in Music. As a freshman she met her husband, Roger D. Moore of Cazenovia, NY, playing organ while he sang in a church service on the Syracuse University campus. While an undergraduate, she received the University’s highest honor: membership in Eta Phi Upsilon, the senior women’s honorary society. She was also a member of Theta Phi Alpha national social sorority and national Sigma Alpha Iota, the women’s professional music honorary society. Later, after initial graduate work at Miami University in Ohio, she received her Masters in Vocal Performance at Syracuse University in 1985. Roger and Joanna were married on August 25, 1956 and a few years later moved to Clinton, NY where they raised their six children. In addition to managing a large home and growing family, Joanna had an active career as a collaborative pianist, working with professional instrumentalists and singers and innumerable music students, many of whom went on to major in music and later established their own musical careers. She taught music at St. Mary’s School in Clinton and the Westmoreland and New Hartford Central School districts, and served as music director for numerous high school musical productions with the Clinton and New Hartford schools. Joanna performed lead roles in many productions staged by the former Utica Opera Guild, including the title role in Carmen at the Stanley Theater, Cherubino in The Marriage of Figaro, Suzuki in Madama Butterfly, Maddalena in Rigoletto, and Ulrica in The Masked Ball. She was a frequent soloist with the Utica and the Rome Civic bands, the Con Amore Orchestra and the Berkshire Lyric Theater. During her long and varied musical career, she performed with Metropolitan Opera stars Jan Pierce, William Lewis and Maureen O’Flynn. In 1979 and 1980, Joanna was musical director for, and performed in, several stage productions which involved her entire family. Known as The Moore Family Singers, the group mounted events including productions of Gilbert and Sullivan’s The Pirates of Penzance and Ruddigore. She was a member of the B Sharp Music Club for over 50 years and served as President of the Club from 1980 to 1982. She was also a member of the Etude Music Club for many years and for over 50 years was a member and soloist with the St. Mary’s Church choir in Clinton, NY. She is survived by her husband of 64 years, Dr. Roger D. Moore, her children Walter (Cheryl) Moore, Helen Moore, Ruth Moore (Mark Wilson), Ben Moore (Brian Zeger), Maria (Joseph) Hayden and Elizabeth Moore; ten grandchildren – Bridgette Moore Stone (Hedley) and Brendan Moore; Alex, Matthew and Thomas Wilson; John Paul, Dianna, Jeffrey, James and Joseph Hayden; brothers- and sisters-in law – Jeanne Moore Cordts of Frostburg, MD; Helen Moore Breitbeck of Oswego, NY; Walter and Trudy Bayer Moore of Cazenovia, NY; Barbara “Billie” Moore of The Villages, FL; and many nieces and nephews. Her beloved sister Marion LaFaro predeceased her in 2005. Joanna’s husband Roger shared: “Joanna Moore was an extraordinary woman as the above data testifies. But her golden qualities were private, indelible, magnificent. Her fidelity to her conscience, family, and God were unique. She displayed an inimitable mixture of charm, beauty, talent, and devotion to principle that hovered around her like an invisible, embracing cloak.” We are grateful to St. Elizabeth’s Hospital staff for their kindness and expertise. Please consider donations to Medical Missions Sisters, 8400 Pine Rd, Philadelphia, PA 19111.

Share Your Memory of
Joanna
Upload Your Memory View All Memories
Be the first to upload a memory!
Share A Memory
Send Flowers
Plant a Tree