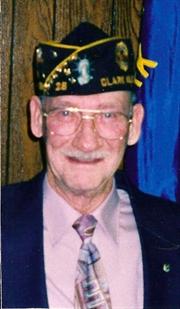 Please share a memory of Kenneth to include in a keepsake book for family and friends.
View Tribute Book
Kenneth Ouch Wardman, 83, of Clark Mills Road, died Friday, March 14, 2008 at the Heritage Home. He was born May 30, 1924, in Whitestown, a son of Albert and Edna Cooper Wardman. Ken graduated from Clinton Central School and served in the US Army Air Corps as a radio operator in the Pacific Theatre during WWII. In 1958, he married Betty Jane Marsh at St. Marks Episcopal Church. The couple always resided in Clark Mills. Ken retired from the US Postal Service after serving as a mail carrier in Whitesboro for many years. He was a very active member of the Clark Mills American Legion Post #26 where he was past commander and an original member of the Drill Team. He also served as County Commander from 1968-1969. He is survived by his loving wife, Betty; two sons and daughters-in-law, Robert Bob and Carol Roberts of Clinton and Harry and Linda Roberts of Clark Mills; eight grandchildren and their spouses, Shannon, Amberley, Karen and Dennis Moore, Michael and Missy Roberts, Kristin and Jared Acee, Michael and Christine Golden and Jennifer and Bill Burnett; six great-grandchildren; a sister Gwen Wolfenden of FL; brother-in-law Bill and Maryann Marsh of Deansboro; several nieces and nephews and a cousin in England. He was predeceased by two brothers, Donald and Eric, a sister and two brothers-in-law, Joan and Thomas Ward and Reggie Wolfenden, and a grandson Bradley Golden. Funeral services will be held 10:30 am Wednesday at Owens-Pavlot Funeral Service, Inc., 35 College St., Clinton. Burial with military honors will be in Kirkland Cemetery. Friends are invited to call Tuesday from 2-4 &amp; 7-9pm. The American Legion Service will be at 7pm Tuesday. Please consider donations to Clark Mills American Legion Post #26, PO Box 244, Clark Mills, NY 13321 or C.O.C.V.A.C, Box 399, Clark Mills, NY 13321. The family thanks the staff of the Heritage Home for the care given to Ken.

A Memorial Tree was planted for Kenneth
We are deeply sorry for your loss ~ the staff at Owens-Pavlot & Rogers Funeral Service, Inc.
Join in honoring their life - plant a memorial tree
Print
Online Memory & Photo Sharing Event
Online Event
About this Event