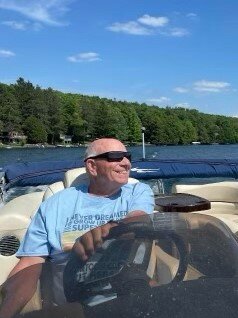 Please share a memory of Ernest to include in a keepsake book for family and friends.
View Tribute Book
Ernest J. Werner, 75, of Bradley Brook, passed away unexpectedly on January 8, 2022. He was born in New Berlin, NY on January 23, 1946, the son of Warren and Ailene “Peaches” Werner. He served his country in the United States Air Force from 1965-1969 during the Vietnam War. Ernie was united in marriage to Janice Finn on January 28, 1967. He operated his own contracting business along with his son Judd for many years. Ernie was a wonderful husband, father and grandfather. He was always willing to help a person in need and could fix just about anything. He coached Little League and Varsity Football for Waterville Central School, and was instrumental in starting the Pop Warner program in Waterville. Ernie loved spending his time at the lake and on his party barge “The Finn”. He will be dearly missed. He is survived by his wife of nearly 55 years, Janice; his three children and their spouses, Heidi Werner and Scott Crawford of Clinton, Judd and Kyra Werner of Clinton, and Evan and Gwenn Werner of Hamilton; four grandchildren, Jacob, Peyton, Lexi and Max; a large extended family including four sisters-in-law, Linda Hayes, Denise Carey, Midge Carey and Melanie LaManna; many nieces and nephews; special cousin Anne Kinnie; and his best friend and beloved dog Maggie. A Memorial Mass will be Celebrated at 11am on Saturday, January 22, 2022, at St. Bernard’s Church in Waterville. Please consider donations in Ernie’s memory to Waterville Sport Boosters.

Share Your Memory of
Ernest
Upload Your Memory View All Memories
Be the first to upload a memory!
Share A Memory
Send Flowers
Plant a Tree