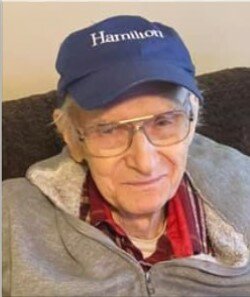 Please share a memory of E. to include in a keepsake book for family and friends.
View Tribute Book
Clark Mills- E. Charles “Chuck” Croop, 89, passed away on October 29, 2021, at Colonial Park Rehab & Nursing Center with his loving family by his side. Chuck was born on August 1, 1932, in Factoryville, PA to the late Andrew and Margaret (Jones) Croop. His family moved to Utica, NY during his teenage years and he attended Utica Free Academy. After high school he served his country and joined the Army during the Korean War. For many years Chuck worked for Genuine Auto Parts which became Fisher Auto Parts until his retirement in 1992. On May 25, 1974, Chuck married the love of his life Shirley Ertley Carter and the two of them spent the next 47 years together. Chuck was a Lifetime Member and Past Fire Chief of the Clark Mills Fire Department he served them for over 50 years. He was also a member of the NYS Fire Chiefs Association. Chuck enjoyed baseball, football, NASCAR, coin collecting and playing cards. His favorite times were family get togethers, he loved to travel to see family and discover new places. Chuck is survived by his wife, Shirley; brother, Robert Croop; Daughter Shelley (Harry) Freeland; stepchildren, Pamela Barclay, Christopher (Tricia) Carter, Gregory (Maureen) Carter, Jeffrey (Mary Jeanne) Carter; grandchildren, Shawna Freeland, Lindsay (Noel) Ames, Sarah Paul, Erica (Josh) Pressley, Mollie (Steve) Patane, Alexander Carter, Ethan Carter, Brendan (Taylor) Carter, Kale (Tiffany) Carter; and 13 great grandchildren. He was predeceased by both of his parents; siblings, Evelyn Bowers, Betty Rae Smith, Jerry Croop, Richard Croop, and Duane Croop; and his grandson, Daniel Freeland. All are invited to call from 4-7PM on Friday November 5th at Owens-Pavlot & Rogers Funeral Service, Clinton. A celebration of life for Chuck will take place at 7PM immediately following calling hours. He will be laid to rest in Kirkland Cemetery. In lieu of flowers please consider a donation in Chuck’s memory to the Clark Mills Fire Department, Clark Mills, NY. The family would like to extend a special thank you to the members of the department for their friendship and kindness to Chuck in his later years. The family would also like to thank the staff at the Colonial Park Rehab and Nursing Center for their care while Chuck was there.

A Memorial Tree was planted for E.
We are deeply sorry for your loss ~ the staff at Owens-Pavlot & Rogers Funeral Service
Join in honoring their life - plant a memorial tree
Print
Online Memory & Photo Sharing Event
Online Event
About this Event