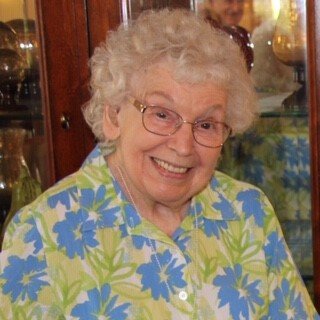 Please share a memory of Marian to include in a keepsake book for family and friends.
View Tribute Book
Marian Sawner Farley, 102, a long-time resident of Walesville, Rome and Whitesboro, passed away on July 13,2021 at Sitrin Health Care Center in New Hartford. She was born on September 6, 1918 in Whitestown, N.Y. to Louis and Anna Jones Sawner. In 1934, Marian graduated as valedictorian of her class from Westmoreland High School. She subsequently graduated from the Utica School of Commerce and then worked at Metropolitan Life Insurance in Rome. Much later, she retired after a 21-year career with Economy Forms Corporation in Metuchen, New Jersey. Marian was united in marriage to Donald Farley of Clark Mills in September 1940. After raising four children primarily in three different homes in Clark Mills, Rome and Metuchen and following their retirement, Marian and Don returned to their roots and settled in Whitesboro in 1985. They shared 71 years together before his passing on May 4, 2012. Marian’s life centered around family. Her grandchildren were the greatest joys of her life. She is survived by her sons, Robert Farley of Darien, CT and Donald (Jo-Ann) Farley, Jr. of N. Caldwell, NJ; one daughter Jean (John) Schumitz of Locust Grove, VA; nine beloved grandchildren and fifteen great-grandchildren residing in Virginia, Maryland, North Carolina, Washington State and New York City. Besides her husband, she was predeceased by a daughter, Mary Lou Harrington; sisters Louise Sawner O’Rourke and Helen Sawner; infant brother Francis Sawner; and brothers Clifford Sawner and Marvin Sawner, CSC. A Mass of Christian Burial will be celebrated at 10:30 a.m. on Monday August 9, 2021 at the Church of the Annunciation in Clark Mills. Burial will follow at St. Mary’s Cemetery, Clinton. All are invited to call on Sunday August 8 from 3:30 to 6:30 p.m. at Owens-Pavlot & Rogers Funeral Service, Clinton. In lieu of flowers, please consider a donation to the Church of the Annunciation, 7616 E. South St., Clinton, NY 13323.

Share Your Memory of
Marian
Upload Your Memory View All Memories
Be the first to upload a memory!
Share A Memory
Send Flowers
Plant a Tree