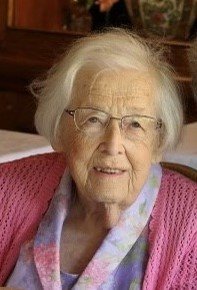 Please share a memory of Fern to include in a keepsake book for family and friends.
View Tribute Book
Fern L. Welch, 100, of Sherrill and a longtime resident of Westmoreland, passed away peacefully at home on January 29, 2021, surrounded by her loving daughters and son-in-law, Terry. She was born in the Town of Butler on June 25, 1920, the daughter of the late Eugene and Grace (VanNortwick) Wood. She graduated from Leavenworth Central School in Wolcott, NY. Fern was united in marriage to George L. Welch on March 11, 1938 in Lyons, NY. The couple shared 66 years of love and devotion until his passing on August 9, 2004. Fern was a talented seamstress, literacy volunteer, an active member of the Westmoreland United Methodist Church, the Westlanders, the Fayetteville-Owahgena DAR and the Westmoreland Grange. She moved to Sherrill in 2007 and joined the Sherrill Garden Club. Fern had a 1-mile route that she walked daily and made two-legged and four-legged friends along the way. She was a devoted wife, mother, grandmother and friend to all she met. Fern cherished time spent with her family, most of all. She will be dearly missed by her four daughters and son-in-law, Jean Plumb of Rome, Midge Ferris of E. Syracuse, Connie Turk of Phelps and Debbie and Terry Loucy of Sherrill; fifteen grandchildren; forty-one great-grandchildren; and one great-great-granddaughter. She was predeceased by her parents, her brothers and sister, her husband, sons-in-law Jerry Plumb and Rick Turk and a great-granddaughter Emma Grace. All are invited to call Tuesday, February 2, 2021 from 1-3pm at Westmoreland United Methodist Church. Please wear a mask and respect current social distancing guidelines. Private services will be held for the family. She will be laid to rest in Westmoreland Cemetery in the Spring. Arrangements by Owens-Pavlot & Rogers Funeral Service, Clinton. Please consider donations to the Westmoreland United Methodist Church in Fern’s memory.
Tuesday
2
February

Share Your Memory of
Fern
Upload Your Memory View All Memories
Be the first to upload a memory!
Share A Memory
Send Flowers
Plant a Tree