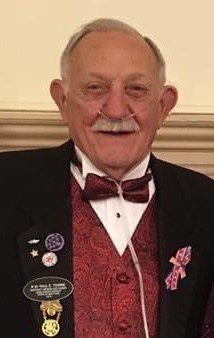 Please share a memory of Paul to include in a keepsake book for family and friends.
View Tribute Book
Paul E. Towne, 76, passed away unexpectedly at home on December 23, 2020. He was born November 27, 1944 in Utica, NY a son of the late William and Verna (Backus) Towne. Paul was always proud to be raised in Oriskany, NY. His “Oriskany blood” ran deep. He was a 1962 graduate of Oriskany Central School District. He was a hard worker his whole life, starting young at Trinkaus Manor. He spent 40+ years working at Steel Treaters in Oriskany and Troy, NY. Paul was an avid outdoorsman who enjoyed trapping, fishing and was a Boy Scout leader. He coached numerous baseball and softball teams in his lifetime. He was a loving and caring father, grandfather and great-grandfather who took pride in the accomplishments of his children and grandchildren. He was a member of Oriskany Masonic Lodge, Ziyara Shriners and The Order of the Eastern Star, both the Lake Delta Mappa Salma and Bell Tower Chapters. He proudly held positions in all of these organizations throughout the years. Paul was united in marriage to Suzanne Howard on March 10, 1978. Paul is survived by his beloved wife, Sue, and eight children: Thomas Towne, Lena & Ron Smith, Daniel & Annette Towne, Kenneth & Kelley Towne, Michael & Lisa Towne, Vicki & Mike Giglio, Lisa Portolese & Mike Nicholson and Timothy (Pete) & Aimee Howard. He was proud of his growing family: 26 grandchildren and 19 great-grandchildren, numerous nieces and nephews. He is survived by his brother and sister-in-law Wayne and Marie Towne, and his sister Ann Smith. He is also survived by his in-laws: Janice Loomis, Robert & Mary Lou Howard, Laura & Jack Decker, Geraldine and William Spellman, Judy & Brad Inman, Mary & Cary Fortnam, Rebecca Howard, Tim Howard, and Dawn Towne. He is also survived by the mother of his children, Diana Hilts. He was predeceased by his sister Linda Waterman and brothers Garry Towne and Edwin & Betty Watson, his brothers-in-law Fran Smith & Michael Howard, and sister-in-law Nancy Caryl. Public calling hours will be Tuesday, December 29, 2020 from 4-6pm at the Strong-Burns & Sprock Funeral Home, 7751 Merrick Road, Rome. Private funeral services will be held for the family. Please wear a mask and respect current social distancing guidelines. Arrangements by Owens-Pavlot & Rogers Funeral Service of Clinton. In Paul’s memory, in lieu of flowers, please consider a donation to Ziyara Shriner’s, 8209 Halsey Rd, Whitesboro, NY 13492.
Tuesday
29
December

Share Your Memory of
Paul
Upload Your Memory View All Memories
Be the first to upload a memory!
Share A Memory
Send Flowers
Plant a Tree