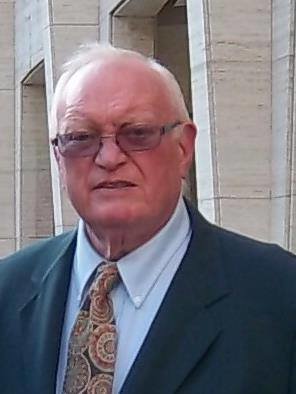 Red was born in Clinton, the son of Charles and Alpha Hillage Foley on June 2, 1937.   He graduated from Clinton Central School in 1955.  He began his printing career at The Clinton Courier and in 1958 began working at the Utica Observer Dispatch Newspaper.  He retired after 40 years as the Pre-Press Manager.  On December 28, 1957, he married Annette Stratton at St. Mary’s Church in Clinton.  He served his country as a member of the 101st Armored Calvary NYARNG until 1958 and also served in the US Army Reserves.

Active in hockey since playing as a youth at the Clinton Arena, he spent many winters opening the arena at 5am on Saturdays and then coaching until Noon.  He served as President, Coach and Referee-in-Chief of Clinton Youth Hockey for many years.  He was also past President of the Central New York Chapter National Ice Hockey Officials and former Eastern Hockey League Linesman for many years.

Red was an active member of this community and a member of many service organizations.  He was Chairperson of the Salvation Army Clinton Volunteer Service Unit in 1996 and was named Service Unit Volunteer of the Year in 2001.  He was a member and past President of Kiwanis, member of the Clinton Historical Society and Clark Mills Historical Society, a member and former Director of the Central New York Post Card Club and a member of the Helmuth-Ingalls American Legion Post #232.  Red was also inducted into the Kirkland Sports Hall of Fame.

In 2002, he became an Inspector for the State of New York at Vernon Downs and became the Recording Judge in 2004, a position he currently held.  He truly enjoyed his work and held the people with whom he worked in the highest regard.

Red is survived by his wife, Annette; their children, Anna Foley, Donna Sparkes and husband William and Mark Foley and wife Dianne; his grandchildren, Tyler Foley and wife Amanda, Caitlyn Sparkes, Ryan Sparkes, Matthew Foley, Christopher Foley and Makala Foley.  He is also survived by his sisters, Dorothy O’Connor and Carol Gleason; brothers, Thomas Foley and wife Nora, Richard Foley and David Foley; sisters-in-law, Jackie Foley and Bertha Foley; and many nieces and nephews.  He was predeceased by his parents, sister Anna Davy and his brothers Charles “Bud” Foley and Harold Foley.

The family wishes to sincerely thank all the Vernon Downs friends and employees and Emergency Medical Technicians who so valiantly tried to save Red’s life.  And also to the many family, friends and neighbors who have helped Red’s family through this most difficult time.

Share Your Memory of
Donald
Upload Your Memory View All Memories
Be the first to upload a memory!
Share A Memory
Send Flowers