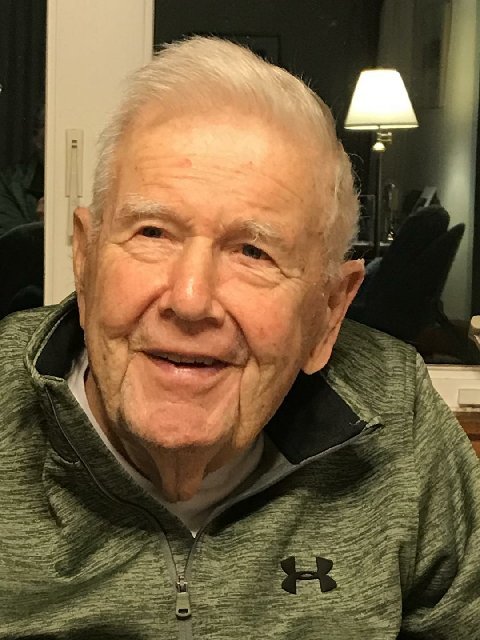 Robert W. Hutchison, “Coach Hutch,” crossed the River Jordan from earth to heaven to join his beloved Joan on December 22, 2018. He passed at the age of 93 in his own home with his family by his side.

He was born November 6, 1925, at Fort Niagara in Youngstown, NY, the son of the late Helen and Harold Hutchison. He graduated valedictorian from Youngstown High School in 1943 where he excelled in baseball and basketball. He then joined the Navy where he served from 1943-1946. Following his discharge he went to Ithaca College on the GI bill and graduated with a degree in Physical Education. It was there that he also met the love of his life on a blind date, Joan Curtis. They were married September 30, 1950, and celebrated 65 years together before Joan’s passing in 2016.

When they returned from their honeymoon Hutch was called up to the Marines. He was commissioned as a 2nd Lieutenant and proudly served until 1952. Hutch and Joan moved to Clinton in 1953. There Hutch began his 31 year career as a physical education teacher, athletic director and coach of several sports, most notably football and track.

While at CCS he received his master’s degree in Physical Education from Cortland. From 1968-1978 he was the director of the Clinton summer playgrounds. Known as a strong motivator, Hutch earned the nickname “The Silver Fox.” He was the premier starter for high school and college track meets for many years.

After retiring from Clinton in 1984 he began working at Owens-Pavlot Funeral Service and traveling with Joan, especially to Cape Cod and North Myrtle Beach. He continued officiating track meets until Joan made him retire at the age of 80. He loved to watch sports and discuss games, past and present, with any of his former players. Hutch was inducted into the Kirkland Sports Hall of Fame in 1994.

Hutch always practiced fitness, walking on his treadmill until recent months. He was a master at puzzles, liked to read John Grisham, make special cards for family and friends on the computer and follow his grandson’s Skidmore hockey team. He also liked talking to the neighbor’s dogs and most of all looked forward to football on Saturday afternoons. He always stuck to his routines and wanted to take care of his family until the end.

Hutch was predeceased by brothers Harold and Jim and sister Pat. He leaves behind six children, Kathy of Deansboro, Mike of Clinton, Ellen (Leigh) of Truckee, CA, Bob of Clinton, Mary of Clinton and Anne (Ralph) of Mansfield, TX. He also leaves 9 grandchildren and 12 great grandchildren.

The family is grateful to Father Croghan, Hospice and neighbors Anne Hameline and the Mogles, for their many acts of kindness.

Please consider donations to Hospice or the Clinton Fire Department.

Share Your Memory of
Robert
Upload Your Memory View All Memories
Be the first to upload a memory!
Share A Memory
Plant a Tree