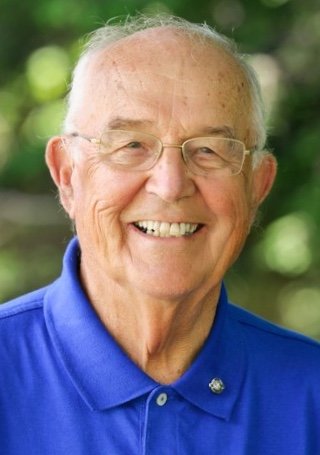 The man with the friendly smile and the twinkle in his eye is gone.  Gil Adams died Sunday morning, April 15, 2018 at the Presbyterian Home in New Hartford.  He was 94 years old.  Born in Newark on December 23, 1923, in God’s Country—New Jersey, for the uninitiated, Gil spent his first forty years in the Garden State: 24 in Caldwell, his hometown, and 16 in Livingston.  He graduated from Caldwell High School, and subsequently followed his older brother to Hamilton College in the fall of 1941.

Pearl Harbor cast its shadow over the future; Gil enlisted in the Army Air Force to study meteorology at New York University in 1943.  He maintained that one of the three most important events of his life was his commission as a 1st Lieutenant in the Army Air Force.  He served as a weather officer at Offutt Field near Omaha and Lowry Field in Denver.  Gil came back to College Hill in Clinton in 1946, and received his diploma in mathematics in 1947.  His first teaching job was at Bethlehem Central in Delmar, NY where he also coached freshman football for four seasons.  It was the beginning of 52 seasons of sports he would go on to coach at four secondary schools in NY and NJ.

The second important life event came in June of 1948—his marriage to Margaret “Mickey” Brant of Columbus, Ohio.  Their union resulted from a fortuitous blind date after Hamilton’s football team visited the U. of Rochester in the fall of ’46. While they lived in Delmar, Gil completed his Master of Arts in Education at Albany State in 1951. They decided to move back to New Jersey to be near Gil’s parents. Teaching jobs at East Orange High School and West Essex Regional High, brought more football and a new sport—ice hockey to Gil’s repertoire.  He began the hockey program at East Orange, and in 1962, he took over the West Essex Knights hockey team.  It resulted in the third of Gil’s important life events.  His team upset Chatham and won the Gordon Cup —a New Jersey state championship.  His five year record at West Essex: 65 wins, 24 losses, 7 ties.  These three life events were instrumental in forming the themes of Gil’s life and career: Education, Family, Service to Others and Athletics.

In 1967, he brought the family to Clinton to serve as director of Alumni Affairs at his beloved alma mater, Hamilton College, an offer he couldn’t refuse.  In 1971, he returned to education: teaching mathematics at Clinton High, where he also coached B Team Hockey, cross country, and tennis.  After sixteen years at Clinton, he retired in 1986; however, he and Mickey did not retire from their many activities.  Their list of organizations is staggering:  the Livingston Presbyterian Church, Stone Church in Clinton, choirs, oratorios, Alumni Councils,  Hamilton Elder Hostels, Kiwanis Club, Clinton Historical Society, Clinton Teachers Association, Fresh Air Funds, and the piece de résistance: the Clinton A Better Chance Program.  They helped initiate the program and were its first resident directors.  Gil was a devoted educator of other people’s children, as well as his own, always striving to make the world a better place.

Gil was a faithful, loving caregiver to his wife, Mickey, for over ten years until her death from Alzheimer’s disease in 2010.  He was also predeceased at early ages by his sister, Janet, and brother, David.

We will all miss Gil for his devotion, his benevolence, his community spirit, his gregarious nature, his beautiful singing voice, and his unfailing enthusiasm. Until he required nursing home care, he could be found at area sporting events, the Hamilton College library and alumni office, or the coffee shop on Park Row, chatting with his many friends.

In 1995, at his 50th Hamilton Reunion, Gil received the coveted Bell Ringer Award—an actual bell.  In 2012, as Grand Marshal of the Fourth of July Parade representing 40 years of Clinton ABC, Gil rang his bell from one end of Clinton to the other, always with a smile and a twinkle in his eye.

Our family would like to offer heartfelt gratitude to the Presbyterian Home, especially the Maple Unit staff, for the wonderful care given to Gil.

In keeping with Gil’s wishes, there will be no calling hours.  The family encourages all friends, family, and well-wishers to attend his Memorial Service on May 5 at 1:00 p.m. at the Hamilton College Chapel, with a reception to follow in the Dwight Lounge of the Bristol Campus Center. In lieu of flowers, please consider donations to: the Clinton ABC Program, P.O. Box 139, Clinton, NY 13323 or The Presbyterian Home Activities Dept., 4290 Middle Settlement Rd., New Hartford, NY 13413 to support the music program.

Share Your Memory of
Gilbert
Upload Your Memory View All Memories
Be the first to upload a memory!
Share A Memory
Send Flowers