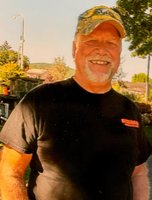 James E. Spellman, 77, of Clark Mills, passed away on January 5, 2021. He was born in Washington, DC, on February 9, 1943, the son of the late Edward and Evelyn (Sawner) Spellman. Jim graduated from Westmoreland High School and proudly served two tours for his country in Vietnam as a Seabee in the United States Navy. He worked as a lineman for Bell Atlantic, New York Telephone and then retired from Verizon. Jim rarely sat idle. He was always on the go. Jim was a firefighter for 60 years with Clark Mills Fire Department and Westmoreland Fire Department. He was Past Commander of the Clark Mills American Legion Post #26 and devoted member of the Combat Veterans Motorcycle Association Chapter 19-8, Syracuse NY. Jim was that guy who was always there to lend a hand to someone in need. He made friends wherever he went. Jim was happiest riding with his motorcycle club and spending Mondays with his friends at archery. He is survived by his son Jeff Spellman and Kim Hickey; daughter Jodi Brewer; girlfriend Reba Fisher; countless friends including his special friends, Jim Fiesthamel, Greg Techmanski, Drew Lindstrom & members of CVMA, Tom Harrison & friends from the phone co. and members from the first responder and local communities. The family would like to thank the nurses and staff of St. Elizabeth Medical Center for their wonderful care during this difficult time. All are invited to Memorial Calling Hours from Noon to 2pm Sunday, January 10, 2021 at Owens-Pavlot & Rogers Funeral Service, 35 College St., Clinton. In keeping with Jim’s wishes there will not be a public funeral service. In lieu of flowers, please consider donations to Combat Veterans Motorcycle Association, Chapter 19-8 Syracuse, c/o 10 Emmons Cr, Camden, NY 13316 or St. Jude’s Children’s Hospital.