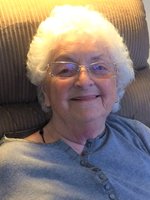 Oriskany Falls - Ethel Farrow, 92, passed away at home on August 27th, 2020, with her family by her side. She was born on April 12, 1928 in Forty Fort, PA, the daughter of the late John and Mary (Thomas) Deeble. At the age of 13, she moved with her family to Chadwicks, New York. She was sixteen when she started working at the Bleachery and, two years later, graduated from Chadwicks High School with the class 1946. Ethel was united in marriage to Jack Farrow on August 24th, 1947. The couple shared 46 years of love and devotion until his passing in 1993. Ethel worked at Colgate University in the Administration and the Science departments before going to work as a secretary for Dr. Hoch and later with Li Krohn. She served as the Town Clerk of Augusta 20 years as well as Tax Collector for a period of time, retiring in 2010 at the age of 81. She believed in service to her community and truly enjoyed the small-town politics. Ethel was a Notary Public, the secretary for the Association of Towns for many years and was a member of the Order of the Eastern Star, the Daughters of the Nile, Grace Church in Waterville and Good Shepherd in Oriskany Falls. She was part of the CWEG Swim program at Colgate for many years and thoroughly enjoyed her friends at the pool. She is survived by her four children and their spouses: Sharyn and Doug Rezsnyak of Walworth, NY; Tom and Irma Farrow of Oriskany Falls, NY; John Farrow of Diamond Bar, CA; Marianne and Jim Brown of Clinton, NY; two beloved grandchildren, Alexis Rezsnyak and Maria Farrow; great-grandson, Brayden Rezsnyak; her nieces and nephews; her special friend and caregiver, Nancy Stewart; her longtime friend and neighbor, Bev Charboneau; and her feline friends, Toby and Biddy. She was predeceased by her parents, her husband Jack, and her brother and sisters and their spouses: Earl and Dorothy Deeble, Thelma and Bob Hooper, Gladys and Tom Atwell, and Dorothy and Kendall Jones. All are invited to a graveside service at 10 a.m. Friday, September 4, 2020 at Crown Hill Memorial Park. Please wear a mask and respect social distancing guidelines. Please consider donations in Ethel’s memory to Stevens-Swan Humane Society.