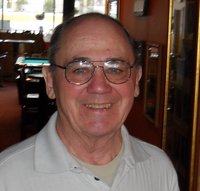 John J. “Bud” Murray, 87, of Clark Mills, passed away at home on July 6, 2020. He was born in Rome, NY on January 19, 1933 to John J. and Mildred Gifford Murray. John was a member of The Church of the Annunciation, Clark Mills. He was a graduate of St. Aloysius Academy and the Electronic Technician Program at Utica College. Bud was united in marriage to Josephine Semeraro Murray on June 18, 1974. They shared a loving relationship of 38 years before her passing in March 2012. Bud served two combat tours of duty in the Korean War on the USS James C Owens, Navy Destroyer DD776. He was a former member of the Clark Mills Fire Department and the Clark Mills American Legion Post #26. He retired from General Electric as a Senior Engineer Lab Technician after 31 years of service. He also was an avid photographer who did wedding photography and enjoyed practicing his craft on his family. He also enjoyed playing in several golf leagues. Bud was a fun-loving person who liked to make people laugh. His family will be repeating his funny quotes for generations to come. He leaves three daughters and their spouses, Jill and Stanley Ulinski, of VT, LaurieAnn and Ron Russell of Sylvan Beach, and Mary and Kevin Krawiec of Chesapeake, VA; three sons, Michael Murray of Holland Patent, Anthony Mould of Whitesboro and John Mould of Clinton; a brother and sister-in-law, James and Patricia Murray of Jamesville; four sisters and brothers-in-law, Joan and John Preston of Rome, Molly and Michael Evola of Frankfort, Susan Waller of SC and Kathy Murray of Rome; in-laws, Rosemary and Michael Schavone of Utica; fourteen grandchildren; eleven great-grandchildren; and several nieces and nephews. He was predeceased by his wife, Josephine; son, Peter A. Mould and daughter-in-law, Roxanne Fall Mould; daughter-in-law, Deborah Fedor Mould; great-grandson Donovan Weston; great-granddaughter, Mia Murray; his parents; and in-laws, Anthony and Mary Semeraro. Private services will be held for the family with burial in Kirkland Cemetery. Arrangements by Owens-Pavlot & Rogers Funeral Service, Clinton. In lieu of flowers, please consider donations to Church of the Annunciation, 7616 E. South Street, Clinton, NY 13323.