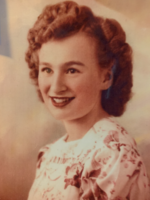 Rosemary Ann Walker Corney “She floats along the river of his thought” Henry Wadsworth Longfellow, a quote found that Rosemary used in her high school yearbook. On Tuesday June 23, 2020, Rosemary made her journey home to God. She was born on February 9, 1930 to Anna Mangan Walker and Harry L. Walker. She attended Verona Schools in NY and graduated valedictorian of her class in 1946, at the tender age of 16. She was actively involved in school band, chorus, school plays & musicals, was a class officer, editor of the yearbook and voted “Queen of the Prom”. It was noted in her yearbook that “the prom was a swell time”! Although a well-rounded young girl, were happy to know she had a little wild side to her back in the day. She admitted to her grandkids that she once skipped school to attend an auction! She was caught! Following high school, she entered St. Joseph’s School of Nursing in Syracuse. Howard “Phil” Corney then entered the scene and soon there was a proposal of marriage. There was one complication to this plan, nursing students were not allowed to be married. Rosie and Phil were joined in matrimony on November 20, 1948 at St. Catherine’s Church in Vernon, NY. Dreams of nursing school were put on the back burner. Rosie and Phil raised 8 children and moved from NY to CA with a few states in between, eventually settling in Clinton, NY. Rosemary was a devoted wife and mother but never gave up on her dream to become a nurse. With 4 children still at home, she enrolled at Utica State and completed her education to become a registered nurse. There were many a night of “breakfasts for dinner” during those years! She added to her resume 24 years at St. Luke’s Hospital in Utica, the majority of that time working in the ICU. She also was an active member of her local CWA and served as secretary- treasurer and continued after her retirement. Daughter Sandy recalls “Mom showing up at my doorstep on the west coast of Florida driving a red convertible. She had been attending a Nursing Union conference on the east coast and couldn’t pass up the opportunity to visit family. It made me smile. Yes, she lived life to the fullest.” Grandchildren were a very important part of her life; she so loved the babies! She made every attempt to attend dance recitals, swim meets, soccer and baseball games, wrestling matches, chorus concerts, musicals, birthday parties and graduations. She drove thru snowstorms to help out when a new grand baby was on the way. She loved her grandchildren. Rosemary was a devout Christian and long-standing member of St. Mary’s Church in Clinton. Missing mass was not an option for her and her faith kept her going. Gardening and making her yard happy with flowers of multiple colors was a true pleasure of hers. She loved nature, spending time in the Adirondacks and being outdoors. Walks in nature, even in the less desirable weather, kept her young and happy. Her home was a safe shelter to many cats, dogs and even horses at one time. The bird feeders in the backyard were full more than not. She loved God’s creatures! Rosie is now back with the love of her life- Phil. She was predeceased by her husband Howard P. Corney, 2 brothers Melvin T. Walker and Harry F. walker and granddaughter Anne Davis. Surviving family include her children, Barbara Spark of San Jose, CA, Sandra Miller of Lake Suzy, FL, Susan (Alan) Edkins of Temecula, CA, Kathy (Michael) Stockbridge of Oneida, NY, Stephen (Sally) Corney of Clinton, NY, Maureen (Mark) Davitt of Victor, NY, Colleen (William) Winchester of Scotia, NY, and James (Susan) Corney of Ballston Lake, NY, 15 grandchildren and 7 great grandchildren. The family is grateful to the staff at Katherine Luther Home in Clinton for their kindness shown to our mother. A celebration of Rosemary’s life will be held at a later date to be determined. In lieu of flowers a donation to the Alzheimer’s Association is suggested. Graveside services will be held at 11am on Tuesday, June 30th at St. Helena’s Cemetery in Oneida, NY. Arrangements by Owens-Pavlot & Rogers Funeral Service.