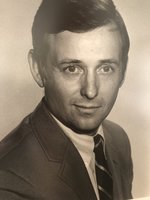 John Olofson, Jr., 91, died peacefully at his home in Clinton, NY, on May 4, 2020, of complications related to Parkinson’s disease. He was born in New York City, on August 26, 1928 to John and Julia (Riordan) Olofson and attended schools in Brooklyn and in East Northport, NY. John joined the Navy near the end of the Second World War, serving for three years as an electrician’s assistant on the aircraft carrier the U.S.S. Princeton as it provided aerial protection for train lines supplying Chinese nationalist forces. On that tour, he visited Hiroshima. John attended Syracuse University graduating in 1953 with a degree in philosophy. That same year he married his first wife Carolyn Noble. Following his graduation in 1956 from Yale University School of Divinity, he was ordained in the United Methodist Church, serving as minister at churches throughout southern New England, with his longest tenures in Pound Ridge, NY, and Simsbury, CT. During many of these years he also served with local fire departments and ambulance crews as an EMT. Following his retirement in 1995 he worked as an out-placement counselor for Drake, Beam, and Morin on a part time basis. John was an inspiring preacher and a much sought-after counselor. Because he was so charismatic, the conference assigned him to churches where membership had fallen off or where they saw potential for growth. As a result, he often oversaw large membership drives and expansion projects. John was a voracious reader of history and detective fiction. He enjoyed cooking, gardening, and playing tennis. He was an avid birdwatcher, particularly interested in raptors, and organized vacations in his retirement in order to visit good birding spots. John was predeceased by his second wife Sylvia Dietlin and his siblings Joan Muller, Bernard Olofson, and Henry Olofson. He is survived by his children Margaret (William) Thickstun, Joan McDonald, Anne (Christopher) Carpiniello, and Susan (Richard) Brandolino; step-daughters—Elizabeth (Richard) Collins and Nancy Dietlin (David Williams); as well as his grandchildren John and Charles Russell Thickstun, Max and Conrad McDonald, Blake and Katherine Carpiniello, Cary and Elizabeth Brandolino, and step-grandchildren Hannah and Samuel Collins.