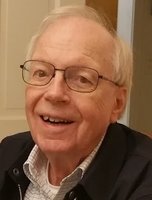 David L. Beatty died on April 30, 2020 at age 80. He was a newspaper reporter, Army officer, author, printer and publisher, high school teacher and, during the main part of his career, a lecturer in economics and anthropology with the University of Maryland. David was a native of Gouverneur, NY, the son of William and Helen Beatty, born June 11, 1939. While in high school, he began a career in which writing would play an important role, reporting on sports for a local newspaper, The Tribune Press. David began his association with the Syracuse area when he won a scholarship to study journalism at Syracuse University, completing his first degree in 1971. He then became a reporter for the Utica Daily Press until being called to active duty for five years in the U. S. Army. He rose to the rank of captain, serving in Paris as public information officer on the general staff of the Intelligence Command, and in Vietnam. He returned to his career in Utica and then worked as a magazine editor at McGraw-Hill in New York. He published a novel about the experiences of Americans in Vietnam titled Don't Tread on My Tire Rubber Sandals. While serving in Vietnam he had concluded that economic development was what Vietnam needed, even before the military effort there was winding down. For this reason, he next joined USAID, the American foreign aid agency as an assistant rural develop officer in Vietnam from 1971 to 1972. When the US became involved in Vietnam, years of fighting during the French period had left the country just five percent self sufficient in rice. The Vietnam economic recovery program was a success story, bringing Vietnam to 90% self sufficiency in rice production by the time the Americans left in 1975. David returned to Syracuse University to pursue studies in overseas economic development. He earned a masters in economics and a Ph.D in anthropology, to be applied in teaching about economic development. His doctoral thesis was based on a study of the printing industry in India. a country he loved and where he spent extensive time learning the culture. He then joined the University of Maryland as a lecturer in its Asian and European divisions, teaching at Army bases in countries that included the Philippines, Okinawa, Japan, South Korea and Germany. After retiring from the University of Maryland, he was eager to live again in New York state, where he worked at Zogby International in Utica doing statistical studies. Later he took a post retirement job teaching high school social studies in the Bronx for four years, before settling in Syracuse. At an earlier point, Beatty had published a book titled Guide to Starting A Printing Business, based on an interest in graphic arts that accompanied his editorial work. Once retired in East Syracuse, he set up a printing business, New Editions Bindery, to produce bound paper cover editions of short-run books and publications. He was a member of the Presbyterian Church. David Beatty is survived by a sister and brother-in-law, Margaret and Bernard Reagan, of Fayetteville, NY and by nephew Matthew Reagan and wife Evangeline of California and by nephew David Reagan of Michigan and by niece Helen Steel and husband Daniel and their sons Jeremy and Jourdan Steel all of California. A memorial service will be scheduled at a later time.