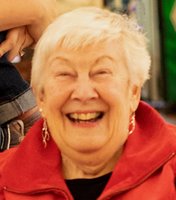 Clinton – Linda K. Kurtyka, 77, passed away March 12, 2020 with her family by her side. She was born in Syracuse on October 14, 1942, a daughter of the late John and Katherine (Kocyla) Wyatt. Linda was united in marriage to Robert Kurtyka in 1962. She worked at Clinton Central School and Holland Farms, but was known as the “Jolly Baker” at the Jolly Butcher shop in Clinton, where she was famous for her delicious sausage bread. Linda was a devoted member of St. Mary’s Church in Clinton where she helped organize the annual picnic, craft fair and many social activities. Linda volunteered her time with the St. Elizabeth’s Guild, making heart pillows for patients. In 2015 she was honored with the Eleanor Nelson Award in recognition of her years of service. Linda was also the last original member of the Thursday Night Ladies group. Her family came first and she cherished her time with them. She is survived by her husband of 57 years, Robert; two daughters, Kathy McDonald and her husband Joe of Canastota and Kris Kurtyka of Clark Mills and her significant other, Bob Ellison; five grandchildren, Katarina Kurtyka, Wyatt Kurtyka, Connor McDonald, Makenna McDonald and Derrick Ellison; her great-grandson, Liam Sobolewski; three sisters and brothers-in-law, Lizbeth and Dan Murphy, Annette and Norm Farley, and Christine and Rick Cooper, all of Syracuse; and her sister-in-law, Mary Wyatt of FL. She was predeceased by her brother John Wyatt. Services will be held at a later date. Please consider donations in Linda’s memory to Stevens-Swan Humane Society.