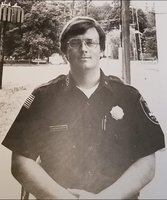 Mark A. Hoffmeister, 65, of New York Mills, passed away March 12, 2020. He was born in Rome on May 25, 1954, a son of the late Eugene and Catherine (Dickerson) Hoffmeister. Mark graduated from Westmoreland Central School with the Class of 1972. He served his country in the US Air Force. Mark began his law enforcement career in 1976 as a Patrolman for the Village of Clinton Police Department. He went on to work with the Oneida County Sherriff’s Dept, was a patrolman for the Utica Police Department and then became Chief of Police with the Canastota Police Department. He then joined the New York State Department of Health Office of Medical Conduct, retiring in 2015 as a Senior Investigator. He was married to Barbara Cooney in 1994, with whom he had his two sons. Mark was a devoted father who would do anything for his sons. He was very proud of his boys. Anyone who knew Mark, knew he was a huge Boston Red Sox fan and loved SU football and basketball. He was passionate about many topics and would love to discuss them with anyone willing to listen. He is survived by his two sons, Matt Hoffmeister of Liverpool and Jeffrey Hoffmeister of Colorado; his brother and sister-in-law, Jeff and Kathy Hoffmeister of Whitesboro; sister, Toni Hoffmeister of Clark Mills and Tom Green; his former wife Barb Hoffmeister; many cousins; and his good friends, Woody Erickson and John Abounader and many more friends. He was predeceased by his parents and an infant brother, Douglass. Calling hours and services will be postponed until a later date. In lieu of flowers, please consider donations to Operation Homefront or The Jimmy Fund.