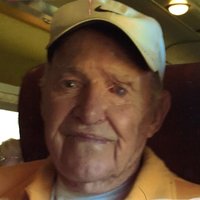 Joseph F. Atherly, 92, passed away January 20, 2020 surrounded by the love of his family. He was born March 26, 1927, in Utica, the son of the late Wilfred and Mildred (Blackwell) Atherly. Joe served his country in the United States Army Air Force, was a life member of the Clark Mills American Legion Post #26 and The Fraternal Order of the Eagles. He was married to Annabelle George, with whom he had his two children, Sherry and Bill. He worked for NY Central Railroad for many years before joining the Post Office. He retired from the Whitesboro Post Office in 1989. In 1996 he was united in marriage to Gloria “Ginger” Kelsey Marsh. They shared fourteen years of love, friendship and golf before her passing in 2010. He enjoyed watching the Boston Red Sox, Chicago Bears and always loved a good Cowboy movie. He will be remembered for his quick wit and caring ways. He is survived by his daughter and son-in-law, Sherry and Bruce Berglund of Centennial, CO; his son, Bill Atherly of San Francisco, CA; stepchildren, Becki Marsh and Debbie Calhoun, Bobbi Marsh and her children, Sarah and John, and David Marsh; four grandchildren, Erin, Meghan, Laura and Nya; two great-granddaughters, Annabel and Millie; his sister Katherine Williams of Boonville; and his nieces and nephews. A Celebration of Joe’s Life will be held in the spring with burial at Mt. Olivet Cemetery. Please consider donations in Joe’s memory to the Clark Mills American Legion Post #26.