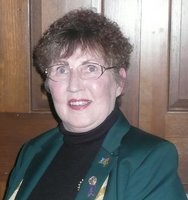 Marlene Brown, 83, passed away peacefully in the comfort of her own home on Thursday, October 31, 2019. She was born in Clinton, NY on July 31, 1936, to the late Robert Burrows Jr. and Anne Elizabeth (Jones) Burrows. She was raised on the family homestead in Clinton, NY, which was originally built as a log cabin. She went through Clinton Schools and graduated from CCS in 1954. After graduating from Clinton she went on to receive her Master’s degree from Utica College.

Marlene taught English and Psychology to seniors at Mt. Markham High School for many years. Following her years at Mt. Markham she became an instructor of American Management at Syracuse University. She was the first instructor in the 1990’s for MVCC’s ‘Women in Transition’, her personal story of tragedy and triumph inspired many local women to begin their lives anew. She founded three small companies and authored numerous books. She earned the degrees of Certified Professional Speaker and Certified Management Consultant which lead her to travel extensively as an international Keynote Speaker, Business Futurist, and Marketing Consultant.

In 2001 she became Chairman of the Children’s Museum Board of Directors. Marlene discovered the museum was in a serious financial condition, rather than closing the doors, she & partner Earl Lewis chose to keep the museum open. They continued to work as volunteers, constantly growing this community asset: an educational resource, family quality of life, & tourism attraction. From 2001-2016, she was the Executive Director of the Children's Museum, through her tireless efforts over the 15 years overseeing the museum operations, she was instrumental in opening additional floors, growing exhibits for school children, families & tourists. In 2007 she got the Children’s Museum declared a NYS and Federal Historic Building to make sure it was preserved for the future. She started a personal Endowment Fund at Community Foundation for future use by the Children’s Museum and secured a grant to install a bathroom on 3rd floor. In 2015 when Marlene retired the Board of Directors and Congressman Sherwood Boehlert honored her with the title Executive Director Emeritus.

Marlene was very involved in Rotary International, she chartered one of 14 Rotary eClubs authorized by Rotary Int’l. She was Elected 2007-08 District Governor of Rotary District 7150 (3rd CNY women to hold this honor). She traveled to India at her own expense to take part in the ribbon cutting of a Rotary woman’s computer school (giving them skills to go from begging to working to support their children) and she traveled to Haiti at her own expense to begin a water/sanitation project. She was also a member of the Clinton & Utica Chambers of Commerce, the BOCES Safe Schools/ Healthy Students Advisory Board, and the Business and Professional Women’s Association.

Even with all these accomplishments, achievements and awards Marlene states her number one priority in life is her family and her God, followed by her profession & her community. In her spare time, she loved to spend time with her family, research, read, take photos of family events, and update websites.

The family would like to extend a special thanks to Christine Hansen for all the care and compassion she offered Marlene over the years.

All are invited to call Tuesday, November 5, 2019 from 3-6pm at Owens-Pavlot & Rogers Funeral Service, Inc., 35 College St., Clinton.  A Celebration of her life will start at 6pm following calling hours. Burial will take place on Wednesday, November 6, 2019 in Crown Hill Memorial Park.